The funeral address I gave for my mother, Anne Scott 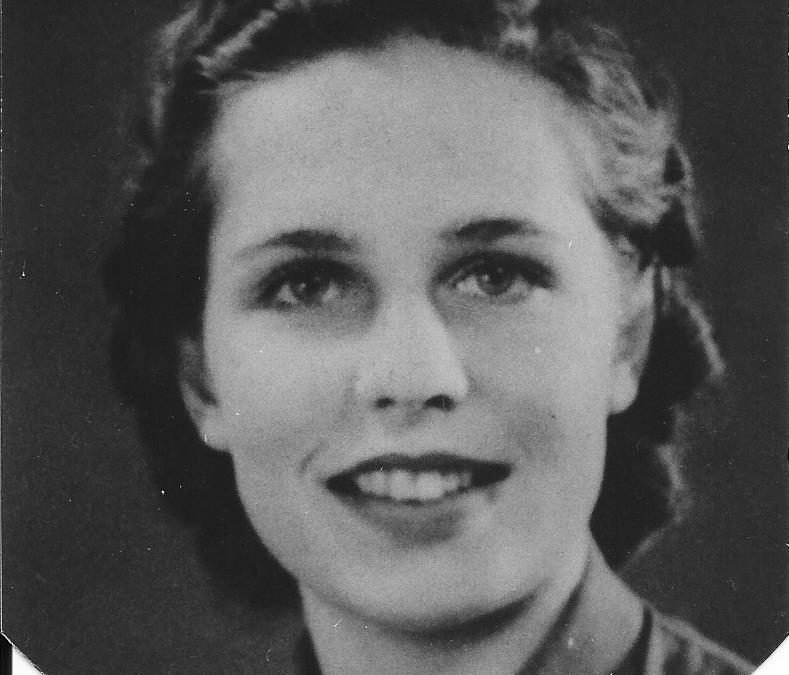 As an introduction to my family background, you may be interested to read the funeral address I gave for my mother, Anne Scott, in December 2017, which I’m pleased to say was very well received:

Our mother, Anne Scott, was born Margaret Anne Elizabeth Howard on the 2nd October 1923 in Suva, the capital of the Fiji Islands.

Her father was a sporting Irishman, Major Tim Howard, who played both rugby and cricket for Trinity College, Dublin – without apparently actually graduating! He went to work in 1913 for the British Colonial Service in the South Pacific, where, among his other achievements, he taught the Fijians how to play rugby – a legacy we are all proud of. He was honoured for an act of derring-do in the First World War, when at the age of 25 in 1917 he was serving as an Inspector of Police in Fiji. He and a junior inspector, armed only with their service revolvers and accompanied by a handful of native constables armed with bayonets, captured the notorious German privateer Count von Luckner and his crew of the Sea Eagle, who had sunk fourteen Allied ships in the Atlantic and Pacific between January and July 1917. Tim Howard was subsequently presented at Lloyds of London with the Committee’s silver medal ‘for meritorious services’ (which I have in my proud possession) and the sum of £100 (worth several thousand today) with which he bought an engagement ring for his fiancée.

His fiancée, Mama’s mother to be, was Elima Marks, who had herself been born in Suva, in 1896. Elima means five in Fijian, and she was the fifth child of Sir Henry Marks, who was an extraordinarily gifted and charismatic South Sea Trader, who had travelled to Fiji from Melbourne in 1881 at the age of 21 and built up a very successful business; he and three distinguished colleagues were highly influential in the development of Fiji in the early 1900s. Henry Marks was their first MP and the honorary Colonel of a Fijian regiment, a deeply charitable man and philanthropist, loved by the Fijian people – there is a Marks Park in the centre of Suva to this day. We owe him a great deal – he certainly helped pay our school fees!

Elima adored her father, Henry Marks, and our mother also clearly revered her grandfather. Elima was a woman of exceptional sensitivity and loving kindness. So my mother was blessed from the beginning with a dashing father and a beautiful mother, and soon by her younger brother Michael in 1926. By this time our grandfather Tim Howard had been promoted to District Commissioner and he was stationed in the remote north-west of the main island Viti Levu near Nandi, where the international airport is these days. This idyllic island paradise was our mother’s home for the first ten years of her life, a world long vanished. She described it to me once as a “blessing”, and I have long believed that her truly exceptional character was formed by her truly exceptional childhood. There was a certain natural goodness, almost innocence, that never left her; she was a child of nature, unspoiled and uncorrupted.

In stark contrast, Mama’s teenage years were much more difficult, when she and Michael, aged 11 and 8, were shipped off to boarding school in England, not to see their mother for four years and their father for even longer. Anne, ever the survivor, emerged predictably as Head Girl of her school, Upper Chine on the Isle of Wight – there is a wonderful photo of her with her hair in two long plaits. Then she spent two years during the Second World War graduating in history at Oxford, beginning her life-long love affair with the city and university. The last two years of the war she served in the WRNS, down in the west country teaching air controllers how to talk returning planes down – which involved running prams around the lawn apparently!

By the end of the war, Mama’s parents, Tim and Elima Howard had retired to Sussex and bought a beautiful house in Upper Hartfield, Cat Street House. So the Howard family met the Scott family, who had been based around the Royal Ashdown Forest Golf Club for generations. Our late father Lieutenant Commander David Scott had served during the Second World War on Arctic Convoys, which Winston Churchill described as ‘the worst journey in the world’; Dad later served on Lord Mountbatten’s personal staff. He and Mama were married in Colemans Hatch church on September 14th 1946. After a stint together in Malta, she flew back to England in time to give birth to me in London on 6th November 1948. My sister Caroline was born in Cat Street House on Boxing Day 1950.

The twenty years between then and 1970, when I graduated from Oxford and Caroline had started to train as a social worker – those twenty years were a sustained period of affection, contentment and happiness, golden years. As teenagers, Caroline and I used to joke that we were the only kids who actually liked their parents and enjoyed spending time with them! In 1956 my father was rather unfairly invalided out of the Navy, so he started a job in the City working for Joe Rank, and our parents bought No 18 Farmer Street in Notting Hill Gate, which was to be my beautiful mother’s loving home for 56 years; on the day she left the house all those years later, she said “I fell in love with it the first day I saw it”. Many, many happy times there, as well as holidays on the canals, parties and dances. My father’s career prospered, and my mother – once Caroline and I were off to boarding schools – threw herself into a distinguished career as a voluntary social worker, which was to extend into her eighties and result in her being awarded an MBE in 1993, particularly for her work with disabled people. She explained her motivation to me in this way: she felt that she had had a very privileged upbringing, and that she wanted to pay back into society for what she had been given. I’m happy to say that I told her more than once that she was the most moral person I ever knew. When her former solicitor once exclaimed “I can’t work with you, Anne; you don’t mind paying tax”, she told me that she didn’t mind paying tax to a society that had been “kind” to her. Virtue is its own reward, is a phrase that I often associate with her.

Throughout those long happy years of our childhoods, our mother was our constant source of strength and affection. She was the rock on which all of the extended family rested and relied. Perhaps her most revealing remark was that she had had to be perfect for the sake of her parents. I suspect she also had to be perfect subsequently for her husband, children, aunts, uncles and cousins! She was always the good child, and her quality of goodness was quite unaffected and natural. Like her mother before her, she always strived to do the right thing by her family and the wider society. Her commitment to excellence in every sphere was remarkable. I once told her that being loved by her was like being caught in the intense beam of a powerful searchlight. Caroline and I have often said that our parents didn’t ‘do emotion’. Theirs was the stiff upper lip generation, stoical in their devotion to duty. She didn’t talk about it; her love was made manifest in all her hard work for others. And she loved us all a great deal; she had a fantastic capacity for love.

In the years that followed, our mother and father lived an immensely civilised and cultured life, travelling extensively through Europe, particularly France and Italy. They had a wide circle of loyal old friends, many from the Navy and the tough days of rationing. My mother started to devote more and more time to her love of art history, and particularly architecture and gothic cathedrals, and she became extremely erudite in those subjects. The many tours she organised and the company of her friends and colleagues meant a great deal to her.

After our father died in 1999, Mama took on the role of family matriarch with great distinction, earning the love and respect of the entire family. Several of us have been helped by her unstinting generosity in buying our homes, and she had a real concern that we all had a safe roof over our heads. That’s how she mothered us, in a totally practical way. She loved her life as a grandmother and in time a great-grandmother, playing a significant role in the lives of her great-grandchildren, so that she will remain in their living memory for decades to come.

I’m glad to say that it was a happy collaboration between Caroline and me, persuading Ma to move from Farmer Street down here to Sussex early in 2013. On behalf of our family, I want to thank all the staff and residents here at St George’s Park for making my mother’s last few years such a happy, active and productive time. From our point of view, this has been a huge success, which gives us great joy. And in the end, she was able to die here peacefully in her own bed, surrounded by the love of her family, with her customary courage and dignity – which gives us such consolation. My mother made some lovely friends here, who were highly valued by her and gave her the warmest pleasure and contentment.

Finally, I want to pay full tribute to my wonderful sister, Caroline, she of the beautiful red hair! Our mother was herself a deeply devoted and dutiful daughter, adored by her parents; my sister Caroline is no less, and it seemed fitting that our mother should have an equally devoted and dutiful daughter in her turn. For many years now, since my father died, Caroline and my admirable brother-in-law Tony have taken complete responsibility for my mother’s welfare, frequently including her in family holidays and outings, theatres, restaurants, family life – plus dealing with health and practical concerns.

But for the last few months, since my mother’s health began to fail, Caroline has gone above and beyond, demonstrating extraordinary competence and compassion, just like her mother, while arranging a team of experienced carers, who were perfectly suited – and to whom we owe a huge vote of thanks and gratitude. Caroline’s grace in fighting for her mother’s life, and doing everything in her power to make things good for Mama, has been impressive and exemplary. She has my complete respect and admiration for this. All-night vigils at the hospital till 5.30am are not so easy at her age! And all the while, she conscientiously kept the extended family briefed in such a considerate manner. I am forever in your debt, darling sister.

I trust it is fitting, in this Christian place, to end on a Christian note. My mother once explained her philosophy to me: “I don’t believe in Christian theology”, she said, “but I practice Christian Ethics”. Caroline and I agreed just recently that Anne was indeed the most Christian of ladies, although not professing as such. She had a truly charitable heart, combined with a luminous intelligence; wherever she went, there were love, beauty and kindness. She was a child of grace, a pure soul and an angel among us.